The profit of UK farming recovered in 2019 after the drought-affected 2018 year.  The latest estimates for Total Income from Farming (TIFF) released by Defra show an increase of 6% in real terms, leaving profit for the industry at £5,278m.

TIFF is the total profit from all UK farming businesses for the calendar year.  It shows the return to all entrepreneurs for their management, labour and capital invested.  The main reason for the rise in profitability was an increase in arable output.  The overall sales of arable crops rose by 6%, with wheat leading the way with a 16% increase in output value.  This was largely a ‘bounce-back’ from the lows of 2018. Overall livestock output was close to year-earlier levels, as were costs.  The chart shows the historic TIFF figures, plus our forecast for the current 2020 year and 2021. 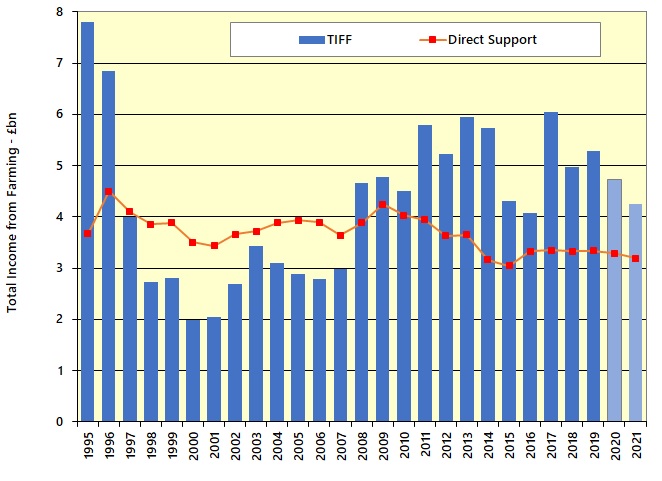 Whilst we are only partway through the 2020 year it seems highly likely that the lack of autumn plantings will affect output from harvest 2020.  There are also likely to be some Covid-19 effects such as reduced beef prices and dairy farm incomes affected for certain producers.  Whilst this will be offset by lower costs, we currently forecast a decline in farm profitability for the year of 10%.  Towards the end of the year there may be market disruption as the Transition Period comes to an end – depending on whether a trade deal has been concluded with the EU or not.  Some of these trade effects may well linger into 2021 which is why there is a (tentative) forecast for another decline.

Alongside the TIFF figures, Defra also published estimates of Total Factor Productivity (TFP) for 2019.  This measures how well inputs are converted into outputs and thus gives an indication of the efficiency and competitiveness of the farming industry.  It is one of the measures that Defra looks at closely, as it tries to improve the performance of UK agriculture.  The figures for 2019 show a significant uptick with TFP increasing by 4% between 2018 – 2019.  This was largely caused by an increase in the volume of outputs (up 3.8%) with a small decline in the amount of inputs used (-0.2%).
Although this is encouraging, any one year’s figures need to be viewed with some caution – the series tends to fluctuate on an annual basis, and it is the trend over a longer period that is more important.  UK agriculture shows an improvement in productivity, but the rate of increase is slow.  Since the figures began in 1973 the annual average increase is around 1%.  From 2000 to 2019 is has been at a lower level of 0.7% per year.