At the outset of World War II, Winston Churchill observed that “Russia is an enigma, wrapped in a puzzle, enclosed in a maze. But there is a key: That key is Russia’s national interest.” He could just as easily have been speaking about Russia today, particularly as far as its agricultural and food markets are concerned.

As recently as five years ago, Russia was still importing the vast bulk of the country’s food & agricultural commodity requirements. However, next year (2018), Russia looks set to produce a record grain crop for the fifth year in-a-row. Precisely how Russian farmers can reach this target on a national wheat yield that tends to be in the region of 3 tonnes per hectare, is a puzzle for many.

That said, farming in Russia is a very high-risk and unprofita-ble occupation. Climate extremes mean a very short growing season in most regions. Specifically, over most of the country, soil temperatures do not support agricultural seed germination and plant growth until mid-May to early June.

Current reports suggest that the country is again on-track to surpass last year’s record grain harvest. Total wheat area is pro-jected to be 25.2 million hectares with 12 million hectares of this being winter wheat. In autumn 2017, Russian grain crop sowings were estimated projected to produce up to 130 million tonnes from the 2017/2018 crop. That is well above this year’s (2016/17) record harvest of 114.2 million tonnes. Wheat is fore-cast to account for 80Mt of this total, a 10% increase on this year’s harvest (72.5Mt). However, it needs to be emphasised that statistics which estimate Russian grain production have fre-quently been unreliable and there is a cultural tendency to over-estimate.
That said, on the above basis, Russia is expected to have 41.8Mt of grain available to export next year, a new record. This will be well up from the 2017 Russian grain export of 36.2Mt. Feed wheat accounts for almost 77% of total grain exports.

This extraordinarily low cost of production is likely to hold for many years to come. It will also continue to put enormous pressure on American, Cana-dian, British, and other European grain producers, particularly in animal feed markets.

The dry weather has meant germination has been patchy in many spring crops, and sugar beet is no exception. Some crops have been re-planted, but the number of these is very small. Most growers have been hoping that some rain (which has now arrived) will be enough to recover the situation.

Whilst many beet crops are undoubtedly behind where they might normally be, there is still enough of the growing season left that overall yields will not necessarily be affected.  The final 2016 crop yield was 71.4 adjusted tonnes per Ha.

The contracted area for the 2017 has grown significantly.  After two years in 2015 and 2016 where the total area was down to 80,000 hectares, this year’s plantings are up to 105,000 hectares.  British Sugar has offered extra Contract Tonnage Entitlement (CTE) as its own stocks have reduced whilst EU and world markets have improved.

On the subject of markets, the EU sugar price was around €495 per tonne up to March this year (EU price reporting is a little slow).  This is above the €475 per tonne threshold level for bonuses to be paid under the new 2017 pricing mechanism.  However, since the start of the year world sugar markets has declined and this may soon start to impact the EU price.  The reference period for the calculation does not begin to operate until October this year, so none of the current market movements are actually affecting the price that growers will receive.

The monthly USDA grain and oilseed world supply and demand estimates and forecasts are especially important in May as it is the first month of each year when they publish their entire thoughts on the forthcoming global grain crop.

World wheat production (737.8 Mt), although projected to be the second highest on record, is forecast to decline by 15 Mt in 2017/18. This estimate is heavily influenced by the US (down by 13 Mt to 49.5 Mt) and helped to rally the markets. Early US survey estimates suggest that winter wheat production is down sharply with the lowest harvested area in a century and lower yields. April snow storms affected large portions of the US winter wheat crop, especially in Kansas, and the US spring wheat area is also projected to decline. But, with global wheat consumption forecast to fall and stocks increasing, the outlook for prices remains rather bearish for 2017/18.

The EU Commission recently released its cereals production forecasts for 2017/18 and updated 2016/17 estimates. Last Autumn’s harvest was below average as disappointing wheat yields, particularly in France, resulted in an 5.5% decrease in cereals production.

A recovery is forecast in 2017/18 with maize expected to be the primary driver with a 10% increase in harvest. Improved yields are forecast to help soft wheat recover some of the losses suffered during last year’s harvest. That said, 2017/18 production is predicted to be 5.5% lower than 2015/16, as the EU crop area is decreasing. 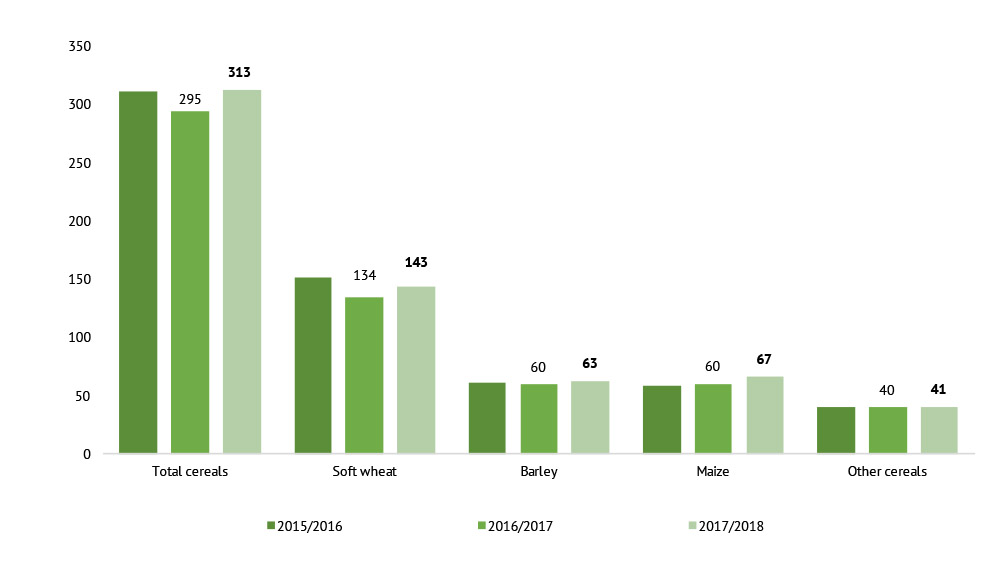 Given the poor 2016 harvest in Western Europe, a recovery in 2017/18 is unsurprising. The fact that the recovery in wheat production is only partial is also a logical reaction to abundant global supplies and the inevitable sluggish prices. This should assist UK wheat prices. UK barley producers may face increased continental competition in 2017/18 although EU barley stocks fell in 2016/17 so excess production should replenish stocks.